Charlie Rose is thrilled to announce the launch of the new CharlieRose.com. The relaunched site is a ground-breaking destination that features the entire history of “Charlie Rose” and its guests. This relaunch comes in concert with an overall reworking of the show’s visual identity, just in time for the historic 25th anniversary of the program in September 2016.

The site is a magnificent window into the show’s history. It also looks forward to the future with a responsive, app-like design that brings Charlie’s conversations to viewers of all types across the globe. Each interview has been carefully indexed by guest name, expertise, topics, and other metadata, so viewers can easily find and watch all conversations on a particular person or subject. Curated collections of interviews display the depth and range of the show’s content, as well as keeping viewers briefed on current events. Most importantly, videos and their associated captions play across all devices, including smartphones, and a cutting-edge transcript player allows users to scroll through a video and transcript simultaneously. Early reviews have praised the site as “exquisitely redesigned from top to bottom,” “a treasure trove,” and “award-deserving.” 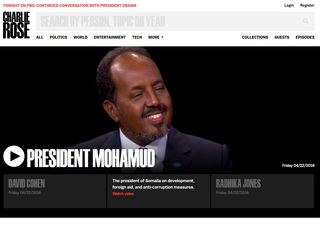 “I’m thrilled by the response to the site,” said Charlie Rose. “So many have written to reflect their pleasure in being able to navigate nearly 25 years of remarkable conversations with the most interesting people in the world. We take great pride in the fact that many say they’re discovering so many interesting aspects of our archive.”

“Charlie Rose” had valuable partners in this project. The fresh branding and visual identity for the site was provided by Pentagram, a New York-based design firm. Partner Michael Bierut and his colleagues Jessica Svendsen, Todd Goldstein, and Julia Lemle created a modular, type-based system for the site that incorporates a custom font derived from the historic Schmalfette, as well as interchangeable design elements that work across all of the “Charlie Rose” digital platforms.

“Compared to the cluttered, high-volume 24-hour din of most television news, Charlie Rose — the man and the show — is an oasis of confident, understated clarity,” said Michael Bierut. “This is epitomized by the set: a round wooden table in a featureless black void. As graphic designers, our challenge was to establish a graphic corollary to the simplicity of that round table.

“Using a newly redrawn typeface that suggested the urgency of classic newspaper headlines, we set the host’s name on two lines. They formed a perfect square, an ideal counterpart to the tabletop’s circle. The combination of squares and circles generated a modular system that allowed us to organize everything from advertising layouts to web pages. No 3-D effects, no shiny metallic finishes. A custom set of quotation marks, again built from the geometry of circles and squares, completed the graphic package. It emphasized what Charlie Rose is all about: conversation, spontaneous and unvarnished, the essence of journalism and the key to understanding an increasingly complex world.” 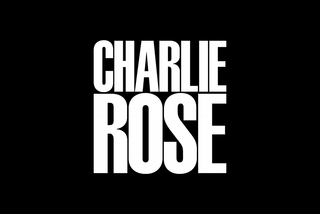 Kemp Atwood, a partner at the agency, said, “AREA 17 is thrilled with the launch of the new Charlie Rose website. Working with the visual identity created by Michael Beirut at Pentagram, we sought to present visitors with a best-in class branded video experience that is fun to peruse and inspiring to watch. A powerful search, curated collections and contextual recirculation keep visitors engaged with over two decades of interviews. This document of his life work introduces Charlie Rose to a new generation and reinforces his longstanding influence in broadcast journalism.” 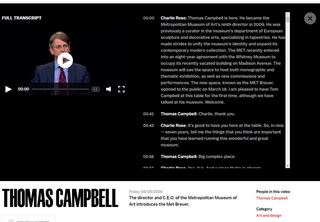 The digitization and storage of the video files was coordinated by Wazee Digital, a media services company based in Denver, Colorado, and Caption Colorado. Special thanks go to Maureen Dempsey, Brian Eldredge, Jack Wenzinger, and Sven Peterson for their work on the project.

Thanks also go to Segment, the San Francisco-based customer data platform which powers data and analytics for CharlieRose.com.

Charlie Rose is brought to you by